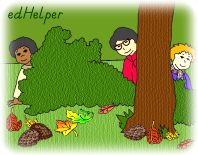 3     Dirk scooped up a small pinecone and flung it at a fence post. "Nothing to do," he agreed.

5     That sounded like fun. The boys looked around. Before long, they had a mound of pinecones.

Paragraphs 9 to 21:
For the complete story with questions: click here for printable


Feedback on The Great Pinecone Battle