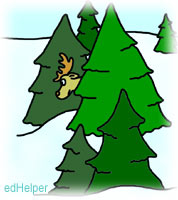 1     Snow fell on Scooter. He hid by the pine trees. His gaze never left the group of five. Their noses were close as they talked. What did they talk about? Scooter did not know. He only knew that he was not part of the group. He hung his head. He was a lonely reindeer.

2     Most reindeer liked to play tag. Many liked to fly. Scooter was better at art. His hooves were like magic. He loved to paint on canvas. Snowy days were the best times to paint. He had lots of pictures in his room. Some displayed snowmen. Others showed ice skaters. Two had red birds on green holly with white snow all around. Only his family knew about his hobby. None of the other reindeer had a clue. They would think it was silly.

3     In reindeer school the next day, the class talked about gifts. The reindeer wanted to give Santa a present. What would Santa like?

8     Snodo pawed at the ground. "We should give the big guy something he has never seen before."

9     That seemed like a fine idea. What had Santa never seen? He went around the world every year! He must have seen everything. What could the class find that would be new to Santa?

Paragraphs 10 to 22:
For the complete story with questions: click here for printable


Feedback on The Lonely Reindeer