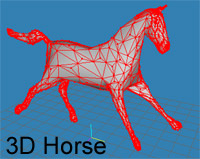 1     People have used pencils and paintbrushes to create art for centuries. Today, artists have a new tool. Computer art is a whole new art style that can tickle our funny bones.

3     Computer-aided design is called CAD. Not too long ago, computer games had flat shapes. These shapes chased each other across the screen. And that was it! Today, CAD is used to design everything from toys to space shuttles. You probably like CAD best in movies, though. Toy Story was the first computer-animated film. Pixar made the film in 1995. It won awards. Then, Pixar made a new movie. It became a huge hit. It was called A Bug's Life. Since then, many more computer-animated movies and television shows have been made.

Paragraphs 4 to 5:
For the complete story with questions: click here for printable


Feedback on Tickling Our Funny Bones with Computer Art