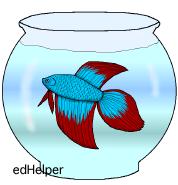 1     "You can't catch me!" the Betta fish teased. He sailed through the water in his glass jar, then wiggled his fins. He really enjoyed his cool new home.

2     His new owner played with him by gently tapping the glass. Sometimes she put her finger on the surface. He let her pet him. He shook his tail and spread out his very pretty fins.

3     As the Betta circled the small bowl, he would also look out the glass. He watched his owner work in her office day after day. She did a variety of things. Today, she opened a box. Then she ran out of the room. She used a rubber stamp on a book. She talked with people. She'd sit at the computer and type for three or four hours. He thought, "I wonder what she is writing about all day?"

4     He did not realize that she was writing about him right now. She was writing a story about how cute he was and how much she enjoyed watching him swim around while she was working. She felt like she had a little friend who would light up when she arrived at work.

5     His owner had a cat and dog at home, and she enjoyed having an animal at home and at work. All of them expressed love in a different way.

Paragraphs 6 to 14:
For the complete story with questions: click here for printable