Freddy and the Freight Train

Freddy and the Freight Train 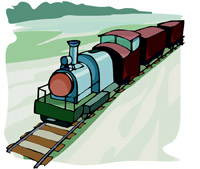 3     Grandma Betty came out to the front lawn to watch the train clickety-clack up the tracks on its way north. Grandma and Freddy waved at the train.

6     "No," laughed Grandma. "Locomotives have steel wheels that fit perfectly on the railroad tracks. Those tracks go all across our country from north to south and east to west."

7     "Lo-co-mo-tive? What is a lo-co-mo-tive?" shouted Freddy. The train was going by very fast on the tracks, and the clickety-clack was so loud that both Grandma and Freddy had to shout to hear each other now.

8     "Freddy, a locomotive is what we call the machine that moves the train. Some people call it the engine of the train," explained Grandma.

9     "If the train follows the tracks, does it need a driver?" Freddy asked.

Paragraphs 10 to 16:
For the complete story with questions: click here for printable


Feedback on Freddy and the Freight Train