Broad Stripes and Bright Stars - Song for a Flag

Print Broad Stripes and Bright Stars - Song for a Flag 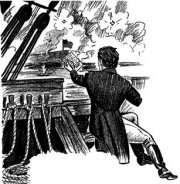 2     Lots of songs have been written about places people live. We write poems for forests or rivers. We even write songs for our countries. This type of song is called an anthem.

3     "The Star-Spangled Banner" is an anthem. Even though the words tell of a banner, or flag, the song is about the United States. A man named Francis Scott Key wrote the words to the song. Key was a lawyer. He lived near Washington, D.C. Here is the story behind the song.

4     In 1814, the U.S. was at war. They were fighting with England for the second time. The war was going badly. Enemy troops had burned the U.S. capital. They had captured Dr. William Beane. Beane was Key's friend.

5     Dr. Beane was being held on a British (English) ship. The ship had sailed for Baltimore with the rest of the English fleet. The British wanted to burn that city like they had burned Washington, D.C.

6     There was one problem with their plan. A fort in the harbor guarded Baltimore. It was called Fort McHenry. The British had to capture the fort before they could attack the city.

7     Key went to ask the British to free his friend. He rode in a small boat to the ship where Dr. Beane was held. The ship sat with the rest of the British fleet. They were in Baltimore's harbor. They had anchored just out of reach of the fort's big guns.

8     Key heard some good news when he got to the English ship. He learned that his friend could go free! But the two men had overheard plans for the attack on Baltimore. They were told they couldn't go home until the attack was over. So Key and Dr. Beane waited.

9     The two friends went back to Key's small boat. It sat behind the British warships. Early in the morning, the ships began their attack on the fort. They fired cannons. Some of the ships fired bombs. They also had a new weapon called a rocket.

Paragraphs 10 to 25:
For the complete story with questions: click here for printable


Feedback on Broad Stripes and Bright Stars - Song for a Flag