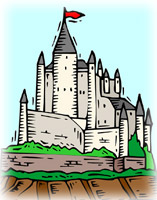 1     When you think about castles, you probably think of knights in shining armor, fancy damsels in distress, and maybe a fat dog lying by the fire. Castles might seem fun to live in, but they were not too comfortable. Most stone castles were cold, stinky, and dirty.

3     Most castles had big halls. They had drawbridges and tall walls around them. The lord and his lady had a bedroom on an upper floor, but that was the only private place in the castle. Every castle had a chapel because the lord and his family went to church every morning. Castles were cold, though, and not too clean.

Paragraphs 4 to 6:
For the complete story with questions: click here for printable