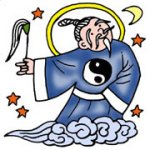 2     At the center of the universe lived a god named Pan Gu. Pan Gu liked to sleep. In fact, sleeping was the only thing he had ever done since he was born!

3     After a long nap of eighteen thousand years, Pan Gu finally woke up. He found the universe too small for him. So he picked up an axe lying next to him and broke the shell. As soon as he did that, the two sources of energy began to separate. The light and pure one floated up and became the sky. The heavy and murky one sank and became the earth. Afraid that the two sources of energy would get mixed up again, Pan Gu stood up. He planted his feet firmly on the earth and used his hands to push up the sky. For the next eighteen thousand years, Pan Gu grew ten feet a day. By the time he died, the sky was so far from the earth that the two sources of energy could never get mixed up again.

Paragraphs 4 to 5:
For the complete story with questions: click here for printable


Feedback on Pan Gu Created The Sky and Earth