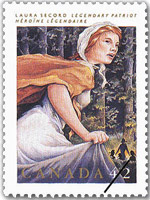 1     It was dark. Laura put on her shawl. Laura went to the door. The night air was cool.

2     The stars were still bright. She looked over her shoulder. The soldiers were asleep near the fire. They would sleep until dawn.

3     Laura smiled. Her husband, James, would tell them she had to go. Her brother was sick. She had to help him. Maybe one of her brother's sons could help her with something she had to do.

4     She walked out the door. Then she closed it softly. The crickets did not stop singing when she passed.

5     She had not gone far when she was stopped. An American sentry spoke to her. He wanted to know where she was going.

7     She got to her brother's home. The stars were fading. The sun was coming up.

8     Her brother, Charles, was awake. Laura was glad to see him. She told him her story.

9     Three American officers had eaten supper at her home. After the meal they talked. There was going to be a battle. They would fight the British soldiers at Beaver Dams.

Paragraphs 10 to 26:
For the complete story with questions: click here for printable