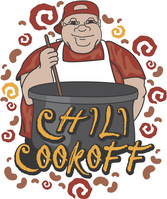 Jay and his father were excited. They had entered the National Chili Day contest. They were going to make their best chili. They hoped they would get the blue ribbon for the best chili in the contest.

Their neighbor, Mr. Burns, was entering the contest, too. He was making his best chili. His chili had black beans and sweet green peppers in it. It was mild and very good.

Captain Green, the fire chief, was making his favorite chili for the contest. It had chili beans in it. It was very hot. Captain Green put jalapeño peppers in his chili. The people at the fire station liked it. Jay thought it might be too spicy.

There were twenty-seven entries in the chili-cooking contest. Jay and his father knew everyone in the contest. Well, almost everyone. There was one new person in the contest. Her name was Becky Dalton. Nobody knew anything about her or her chili.

The day of the chili cooking contest was beautiful and sunny. Everyone set up their cookers in the community building. Soon the smell of chili filled the air. Jay thought it was the most wonderful smell in the world.

At 11:30 sharp the judging began. The three judges tasted each person's chili. Then they wrote scores on their pads.

Jay and his father waited while the judges tasted the first ten chilis. The judges came to their space. Each judge tasted the chili they had made. They wrote scores on their pads. Then they went on to the next chili.

The new person was last. Jay wondered what her chili was like. Was it mild? Was it spicy? What did it have in it? He did not have to wait long to get the answer to some of his questions.