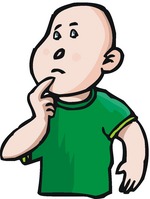 Mrs. Smith was very sick. All of her hair fell out. She was very sad. She thought everyone would laugh at her.

The next morning Jim said, "Mom, I will be late today. I want to go to the mall. I can walk there from school."

That day after school Jim walked to the mall. He found the shop he wanted. He went in and sat down. He told the manager what he wanted. The manager thought it was a great idea. "You are a very good son," he said.

Next, Jim went to a hat shop. He bought two caps. They were bright red and white, his football team's colors. He put one cap on. The clerk wrapped the other cap with yellow paper. He tied a yellow bow on it.

Jim took the box and walked home. He hoped his mother liked her gift. He hoped she would smile. He missed her smile.

When Jim got home, his mother was sitting on the porch. She was reading a book. When she heard Jim, she looked up. She did not smile.