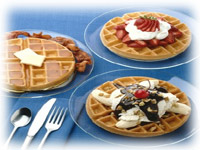 Will loves to eat. He likes all kinds of food.

His favorite food is waffles.

Will eats waffles for breakfast. He puts syrup on them.

Will eats waffles for lunch. He puts peanut butter and jelly on them.

Will eats waffles for dinner. He puts bacon, lettuce, and tomato on them.

Will even had a waffle for his birthday! His mother put five candles on it!

Will's father said, "Will, if you eat one more waffle today, you are going to turn into a waffle!"

Will ate one more waffle just before he went to bed.

Later that night, Will began to dream.

He dreamed he had turned into a waffle! He was just a big, round waffle with eyes, hands, and feet.

Will was lying on a plate. There were three waffles on top of him. He had trouble breathing.

What was that noise?

Uh-oh! It was someone in the kitchen.