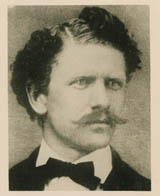 Ambrose Bierce, American journalist and fiction writer, was well-known for his surprise plot twists and war stories. He used his own experiences as a soldier in the Union Army to create realistic stories. Bierce was also known for his use of wit and satire and would attack such issues as greed, power, and corruption. In addition, he was also critical of racist politics and religious chauvinism that was present during his time period. Bierce often influenced other writers in creating stories with mystery and suspense.

Bierce was born in 1842 in Meigs County, Ohio, to parents Marcus and Laura Bierce. He was one of thirteen children, all having names beginning with the letter A. Bierce spent much of his childhood on a farm in northern Indiana. He had a rigid and often difficult childhood where both poverty and religion were a constant issue. Recollections of his childhood appeared in some of his writings. Although Bierce attended some high school, at the age of fifteen he became a printer's apprentice for an antislavery paper. Not only did Bierce oppose slavery, he also disapproved of those who attacked women and immigrants.

Bierce's one term at a military school was of no comparison to his time in the army. He enlisted in 1861 and ultimately rose to the rank of lieutenant. He served in the Union Army until 1865 during the American Civil War. This war experience had a significant impact on Bierce as a future writer. During the war, he fought in several battles. One of the battles later became the setting for one of his best stories, "Chickamauga" (1889). "Chickamauga" is the story about a young boy who witnesses wounded soldiers from a horribly bloody battle crawling towards a creek. The boy directs the soldiers to his home, but he finds his mother dead and his home burning. Bierce himself became wounded at Kennesaw Mountain. He was shot in the head, and the bullet became lodged in his skull.