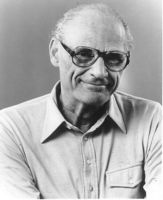 Born on October 17, 1915, American playwright Arthur Miller was a major figure in the American theater and cinema. He was best known for his play, Death of a Salesman, and for his marriage to actress Marilyn Monroe. Miller wrote other plays such as The Crucible, A View from the Bridge, and All My Sons, all of which are still performed and studied throughout the world.

Miller was born in New York City to parents Isidore and Augusta Miller who were Jewish immigrants from Poland. The family lived in Manhattan until the 1929 Wall Street Crash when Isidore, a ladies-wear manufacturer and shopkeeper, was financially ruined. The family moved to a small home in Brooklyn. Naturally this ordeal had a strong impact on Miller. The Brooklyn home in Death of a Salesman was even modeled after Miller's own small home following his father's financial ruin.

As a boy, Miller enjoyed playing sports and reading adventure stories. He attended Abraham Lincoln High School and graduated in 1932. Because of his father's financial ruin and the Great Depression, money was not available for college. Therefore after high school graduation, Miller worked menial jobs in order to earn money for tuition. Eventually, Miller was able to attend the University of Michigan where he majored in journalism and became a reporter and night editor of the Michigan Daily, the student paper. Miller later switched his major to English. Dostoevsky's The Brothers Karamazov was the influence for Miller's decision to become a writer. During this time in his life, Miller wrote his first work, No Villain, for which he later won the Avery Hopwood Award.

After Miller received his bachelor's degree in English in 1938, he returned to New York. Despite a job offer as a 20th Century Fox scriptwriter, Miller joined the Federal Theater Project, a New Deal agency that was established in order to provide jobs in the theater. He also wrote scripts for radio programs. Because of fears of possible Communist infiltration, Congress closed the Federal Theater Project, so Miller worked in the Brooklyn Navy Yard and continued his radio plays.