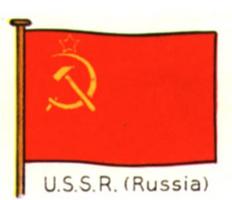 Breaking Up the Soviet Union

The Communist governments created by Lenin and Stalin in Russia had grown to include many smaller countries. Poland, Romania, Bulgaria, Czechoslovakia, East Germany, and Hungary were now all part of the Soviet Union. The official name was the Union of Soviet Socialist Republics (USSR). Living under the rules of the USSR was sometimes hard for the citizens of these countries. The Communist Party made most of the decisions for the people. They decided what their wages would be. They decided what the cost of homes and apartments would be. As a matter of fact, the Party owned most of the homes and apartments. Businesses and manufacturing plants were also owned by the Party.

Elections to see who would be in the Soviet government were held frequently. The people were urged to vote in these elections. Voting was usually very easy because there was only one candidate to vote for. And that candidate was chosen by the Communist Party.

By the late 1980s, it was apparent that the basic ideas for the economy were not working. The citizens of the Soviet countries were not happy. They didn't like being told what to do all the time. They were tired of being poor all the time. Through the media and travel, they could see that people in other countries were living a much easier life. They wanted the freedom and luxuries they saw other countries enjoying.