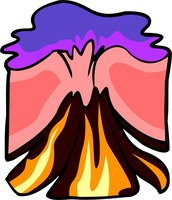 Volcanoes have been erupting since shortly after the Earth was formed. They are still erupting today. About twenty volcanic eruptions occur each day on Earth. Some of these eruptions are quiet. Others are violently explosive. Volcanoes can be very dangerous.

What are the dangers of volcanic eruptions? Most people think the biggest danger is lava flows. However, lava does not usually injure people or animals. The lava flows slowly. Most anything that moves can get out of its way. But lava can run over houses and roads, causing much destruction.

Pyroclastic flows are mixtures of hot ash and gases. They are more dangerous than lava flows. Pyroclastic flows can travel very quickly down the slope of a volcano, destroying everything in their path.

Ash, rock fragments, and particles, called tephra, from volcanic eruptions can cover a wide area. They can be heavy enough to collapse buildings. They can also destroy plants and trees. Poisonous gases that spew out of volcanoes are very unsafe. Eruptions can also cause giant mudslides. They can even trigger tsunamis, which are giant, destructive ocean waves.