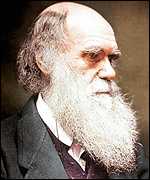 In 1831 the HMS Beagle left England on a journey to chart the coastline of South America. The captain hired Charles Darwin to be the ship's naturalist. Darwin, only twenty-two years old at the time, was more interested in science than the career as a clergyman that his father had planned for him. Darwin's job on the Beagle was to take notes about the living things he saw throughout the voyage.

The plants and animals Darwin saw in South America were very different from those in England. He wondered about the diversity of the animals and their environments. Could one of those things affect the other?

The Beagle's voyage was intended to last for two years. Instead, it was five years before Darwin returned to England. During those five years, he spent about two-thirds of his time on land observing plants, animals, and fossils. Darwin was amazed at the diversity of the living things he saw. The fossils, too, puzzled him. Darwin saw fossils of animals like the sloths he saw living in the trees. However, the fossils were much bigger than any of the living animals Darwin saw. Darwin wondered what had happened to the larger creatures of the past.