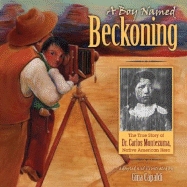 "In behalf of our people, with the spirit of Moses, I ask this-THE UNITED STATES OF AMERICA-LET MY PEOPLE GO."

These words were written by Dr. Carlos Montezuma. They were read on the U.S. Senate floor in 1916. Dr. Montezuma was a voice for Native Americans in the early 1900s. He lobbied the U.S. government to honor their treaties with the Yavapai Indians. He spoke out for civil rights for Native Americans.

You see, Dr. Montezuma was one of the Yavapai Indians. He was born in central Arizona around 1865 or 1866. His Yavapai name was Wassaja (pronounced wass-jah), a word that has been translated to mean "signaling or beckoning." He was captured by another group of Indians when he was only five years old. He was taken from his home and his family. He was sold as a slave.

Wassaja was lucky. The man who bought him was named Carlo Gentile. Mr. Gentile was an Italian who traveled across the Atlantic Ocean to the United States. He worked as a photographer. Both the man and the boy knew what it was like to be different. Mr. Gentile didn't need a slave boy. He bought Carlos anyway and gave him a name similar to his own.

They lived in New York City and Chicago for several years. Then Mr. Gentile's photography studio was lost in a fire. Mr. Gentile had to send Carlos away. Carlos then lived with a Baptist minister in Illinois.