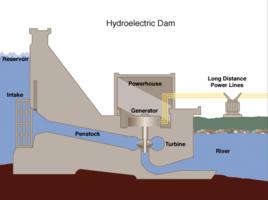 Niagara Falls is one of the largest waterfall systems in the world. Enormous amounts of water flow over the falls every second. This movement releases a great amount of energy. It is used to produce electricity. How does this work?

The water that is diverted from the river to the power plants is used to make electricity. The water flows over huge turbines. The motion of the water turns the turbines. This converts the kinetic energy of moving water to mechanical energy. It drives a generator that produces electricity. At one of the plants, the generators can also be used as pumps. When demand for electricity is low (and the price of operating a pump is low), water that has already gone through the turbines is pumped back up to the water reservoir. This means that the same water can be used over and over again to create electricity. There is enough electricity made to power western New York and parts of Canada.

Electricity that is generated from flowing water is called hydroelectric power. The Niagara is not the only river that produces this kind of power. This happens all over the world. Dams are built across rivers. Behind the dam is a reservoir. The water flows through large pipes. It turns the turbines that produce electricity.