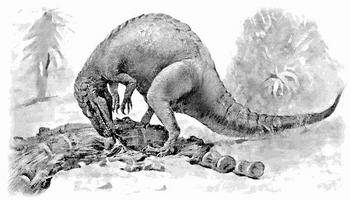 Allosaurus (AL-loh-SORE-uss) was a large, carnivorous dinosaur that lived on Earth 150 million years ago in the late Jurassic period. At about forty feet long, it was one of the largest predators that ever lived. It had more than 70 sharp, curved teeth that were serrated on the edges like knives. This fearsome beast no doubt ruled the continent of North America during its time.

Its large head had bumps and knobs on it, with bony ridges above the eyes.