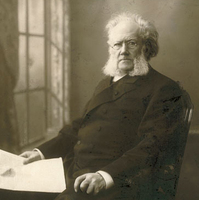 Henrik Johan Ibsen was a notable Norwegian poet and playwright who lived during the nineteenth century. Born on March 20, 1828, he was considered to be one of the four greatest, most influential playwrights of his time and has often been referred to as the founder of modern prose drama. His writings are realistic and modern, moving away from a more romantic style, focusing on bringing the problems and ideas of his time onto the stage. Ibsen turned the idea of proper Victorian plays upside down.

Ibsen was born in Skien, a coastal town in southern Norway. His father, once a successful merchant, altered his family's social position when he experienced financial failure. His family had once been known for their high social position, but after their financial crash, they were abandoned by friends and left with feelings of disgrace. Ibsen's mother turned to her faith for comfort, but his father fell into a deep depression. These events caused feelings of bitterness to settle in Ibsen, and within his plays are characters that mirror his parents and their financial difficulties.

As a child, Ibsen had dreams of becoming an artist. He was exposed to art through his mother, an avid painter. Unfortunately, poverty brought his education to an abrupt halt. Eventually at the age of fifteen, Ibsen left home to become an apprentice druggist at a pharmacy in Grimstad. Ibsen then moved to Christiania (now known as Oslo) and briefly attended a school for university candidates known as a "student factory."

It was during this time in Ibsen's life that he also began writing plays. In 1850 he published his first play called Catilina. Unfortunately, the play was not performed. His next play, The Burial Mound (1850), was produced but only performed a few times, receiving very little attention. Both of these plays were written under his pseudonym, Brynjolf Bjarme. Despite his lack of success, Ibsen still continued writing in hopes of being a successful playwright.

For the next several years, Ibsen worked at a small theater in Bergen and was involved in the writing, directing, and producing of more than 145 plays. Even though he did not publish any of his own plays, he gained practical experience which would later be of value to him. In 1857 Ibsen moved back to Christiania to work for the Norwegian Theatre. This was a financially difficult time for Ibsen, but he did, however, meet Suzannah Thoresen and married her the next year. They had a child the following year who they named Sigurd. This would be their only child together. When the theater experienced financial collapse, Ibsen moved to the Christiania Theatre. He wrote three plays during this time: The Vikings of Helgoland (1858), Love's Comedy (1862), and The Pretenders (1864). His plays continued to fail, and Ibsen became very disillusioned with Norway and decided to go abroad. He would not return permanently for twenty-seven years.