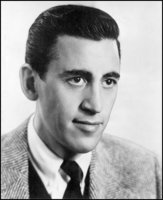 Jerome David "J.D." Salinger, born on January 1, 1919, was an American writer best known for his controversial but widely-read novel, The Catcher in the Rye. He was a popular writer considered by many readers as well as critics to be one of the most influential writers of the latter part of the 20th century. Unfortunately, Salinger's fame brought him much public attention and scrutiny and caused him to become reclusive.

Salinger was born in New York to parents Sol and Marie Salinger. The couple had two children, Jerome and Doris. When Salinger was young, he initially attended public schools in Manhattan, but he was eventually moved to a prep school, McBurney School, for grades nine and ten. He found it difficult to adjust to this school, but he was able to find areas of interest. He acted in several plays where he showed a talent for drama. Unfortunately, his father was opposed to his son's acting. Eventually Salinger was moved to the Valley Forge Military Academy in Pennsylvania. He maintained average grades but kept active in extracurricular activities. Salinger acted in school plays, edited the yearbook, wrote the class song, participated in the choir, and wrote several short stories.

After graduating high school in 1936, Salinger moved on to college at New York University with plans to study special education. However, he only attended for a semester. His father then convinced him to learn about meat importing, so he was sent to Vienna, Austria, to work at a company. Luckily, Salinger left Austria just a month before it was annexed by Nazi Germany on March 12, 1938. He then enrolled in Ursinus College in Pennsylvania that same year, but just like before, he only attended for one semester. The structure of college was difficult for Salinger, despite his intelligence. He just had no patience for formal academic learning.

In 1939 Salinger transferred to Columbia University where he was able to take an evening writing class taught by Whit Burnett, the editor of Story magazine. Burnett made a lasting impression on Salinger, and it was to Story that Salinger submitted his first story, "The Young Folks," in 1940. Salinger temporarily worked on a cruise ship but later began submitting short stories to The New Yorker: "Lunch for Three," "Monologue for a Watery Highball," and "I Went to School with Adolf Hitler." Unfortunately, all three stories were rejected. Fortunately, The New Yorker later accepted his story "Slight Rebellion off Madison," but when Japan attacked Pearl Harbor, the story's publication was delayed until 1946.

Salinger entered the military service in 1942, several months after the Pearl Harbor attack. While in the army, he continued his writing and publishing, even carrying a portable typewriter in his jeep. Sadly, Salinger's experiences in the military were very emotionally damaging. His war experiences did influence his writing. Salinger published works in Collier's and The Saturday Evening Post, but despite his efforts, The New Yorker rejected all his submissions between 1944 and 1946. After the war, Salinger had a brief marriage lasting only eight months.