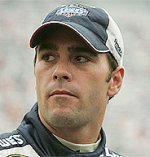 In his years of NASCAR Nextel Cup competition, Jimmie Johnson has become a force to be reckoned with.

Jimmie was named after his grandfather, a WWII decorated veteran. He was born on September 17, 1975, in El Cajon, California. He married his wife, Chandra, at the end of 2004 in a small ceremony in the Caribbean. The couple has two daughters.

Jimmie became interested in racing at an early age. He started at five years old by racing small motorcycles. He and his family spent many weekends at race tracks. He won his first championship on a motorcycle at age 8, even after damaging his knee.