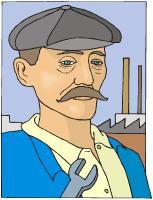 What do you think of when you think of Labor Day? Possibly that it's the last long weekend of the summer? Perhaps you don't start school until after that holiday, but what do you know about the day itself? Did you know it's a holiday that celebrates all the people who have worked so hard to make this country great?

During the nineteenth century, laborers worked very long hours at their jobs. It was not uncommon for a work shift to last twelve or fourteen hours, and for laborers to work six days of the week. In the 1870s many laborers were banding together into unions. They wanted better working conditions for workers. They wanted shorter hours. An eight-hour workday would be a dream come true.

Two men were instrumental in establishing the holiday. One man, Matthew Maguire, a machinist and secretary for the Central Labor Union of New York, thought of the idea that working people should have a holiday in their honor. He was a modest, quiet man who did not promote himself, yet he is the "Father of Labor Day."