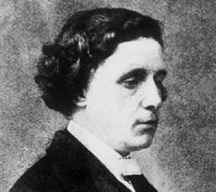 If you have read conversations between a walrus and a carpenter, followed a girl named Alice down a rabbit hole, or battled a Jabberwocky late in the afternoon, you have read some of the works of Lewis Carroll. That was his pen name. His real name was Charles Lutwidge Dodgson.

Charles was born on January 27, 1832, in the small town of Daresbury, in Cheshire, England. He was the third child of eleven, and the oldest son of his parents, Jane Lutwidge and the Rev. Charles Dodgson. The community was isolated, so the children learned to entertain themselves with games. Charles was especially good at this. When he was 12, the family moved to Croft-on-Tees, Yorkshire.

He attended Richmond school for a year, but moved the following year to attend Rugby school from 1846-50. He hated those four years because he tended to be shy, and the bullies picked on him. He was also deaf in one ear as a result of an illness. After finally leaving Rugby, he was tutored at home by his father for several months. He enrolled as an undergraduate at Christ Church, Oxford, in January 1851.

Dodgson excelled in mathematics and classical studies. The following year, he was awarded the equivalent of a scholarship. Two years later he was first in his class for math, and the following year he was made a lecturer or teacher. He held this position until 1881.

The fellowship or scholarship that he held required that he not marry and that he take Holy Orders in the Church of England. He was ordained a deacon in December 1861, but he did not become a priest. He was happier in his position at the college.