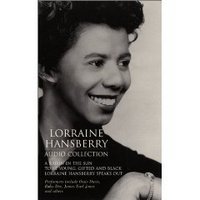 Lorraine Hansberry, an African-American playwright, author, and painter, was born on May 19, 1930, and died on January 12, 1965. She grew up in Chicago, Illinois, and was the youngest of four children to parents Carl Augustus Hansberry and Nannie Louise Perry. Hansberry's father was a successful and well-known real estate broker and active member of the Republican Party. Both parents were intellectuals and activists who raised their children in this same way.

Having spent her first eight years of life in a black neighborhood on the south side of Chicago, Hansberry then moved with her family to an all-white neighborhood, where they began experiencing racial discrimination. There were no official laws against segregation at this time in Illinois, but neighborhoods were typically self-separated along racial lines. As a protest against segregation laws, Hansberry's parents sent her to a predominantly white public school rather than a private one. Hansberry's father then occupied himself in a legal battle against a group of white homeowners who worked together and agreed not to sell property to black people. His anti-segregation case, Hansberry v. Lee, went all the way to the Illinois Supreme Court, and eventually he won.

After completing high school, Hansberry moved on to the University of Wisconsin where she studied art. She was a member of the Young Progressives of America and the Labor Youth League. She decided to become a writer after she attended a school performance of a play, so she quit college in 1950 and moved to New York. While in New York, Hansberry worked as an associate editor for Freedom, Paul Robeson's newspaper. She also attended the New School for Social Research where she took classes in writing. She read all she could of African-American history. Hansberry was in the center of Harlem's cultural activity and was fortunate enough to meet several famous writers such as Langston Hughes and W.E.B. Du Bois. She was heavily influenced by these writers as well as being influenced by William Shakespeare and Frederick Douglass.