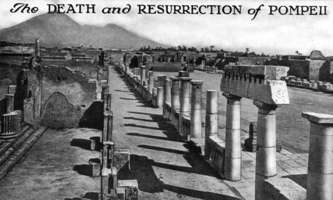 Mt. Vesuvius and the City of Pompeii

To people in Pompeii, August 24, 79 A.D., started out like every other normal day. The streets were bustling with activities. People were busy going to and from their various destinations. Then, all of a sudden, around 1 o'clock in the afternoon, they saw a column of smoke bursting out of Mount Vesuvius. Astonished as they were, they knew that this was not the time to stand idle. They had to make a run for it right away. Some left town immediately, not knowing exactly where they should go. Others hurried back home to pack up valuables and plan their next move. In the midst of this chaos, a hail of pumice stones and volcanic rocks began to pour down onto the city. The smell of sulfur filled the air. The day became a horrifying nightmare. Nineteen hours later, the eruption of Mount Vesuvius finally stopped. The city of Pompeii was gone, buried underneath 9 feet of volcanic ash! For the next 1,500 years or so, the site remained undisturbed and completely forgotten. It might have still been the case had the architect Domenico Fontana (1543 A.D. - 1607 A.D.) not decided to dig a new water conduit in the late 16th century. While he surveyed the area, he discovered the ruins of Pompeii by chance. But nothing more was done until Charles III, King of Naples and Sicily, came along and ordered a systematic excavation in 1748 A.D. What he found was a city frozen in time. It was truly amazing!

Now back to that doomed day in August 79 A.D. A man by the name of Pliny the Younger (circa 63 A.D. - 113 A.D.) witnessed the eruption from his uncle's house at Misenum. Later on, he wrote to his friend Cornelius Tacitus describing what had happened. The natural disaster he saw and documented would eventually be known as the Plinian eruption. Through his words, we know that his uncle Pliny the Elder, a military commander in charge of the Roman fleet in the Bay of Naples, left home to plan a rescue mission to save his friends in Pompeii, as well as to gain a better view of the phenomenon. After having the warships prepared, he and his men set sail and managed to cross the bay and reach Stabiae, a coastal town southwest of Pompeii. En route, Pliny the Elder noticed that the wind did not follow its usual direction of blowing from the north out to the sea on that particular day. Rather, it blew inland from the southeast across the Bay of Naples. Experts later confirmed that much more of the debris would have fallen into the sea had the wind followed its usual pattern.

Upon arriving at Stabiae, Pliny the Elder apparently dined and bathed, trying to calm his friends down by showing his own composure. Meanwhile, the eruption of Mount Vesuvius was in full swing. The pumice stones and volcanic rocks were falling down heavily now. Buildings were shaking violently as if their foundations were about to give way at any minute. Thinking that going outdoors was simply a notion too dangerous to consider, Pliny the Elder and his companions decided to stay in. Then, according to the nephew (who most certainly heard it from the survivors for he did not actually go with his uncle and was still at Misenum with his mother at that time), "The flames and smell of sulfur which gave warning of the approaching fire drove the others to take flight and roused him (Pliny the Elder) to stand up. He stood leaning on two slaves and then suddenly collapsed, I imagine because the dense fumes choked his breathing by blocking his windpipe which was constitutionally weak and narrow and often inflamed. When daylight returned on the 26th -- two days after the last day he had been seen -- his body was found intact and uninjured, still fully clothed and looking more like sleep than death."