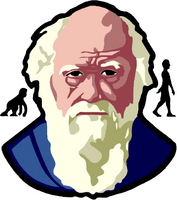 In 1831, Darwin was the ship's naturalist aboard the HMS Beagle for a five-year journey. The ship sailed to South America and the Galapagos Islands. During those five years, Darwin saw many unique animals. He wondered how and why the animals seemed to be perfectly suited to their environment. He began to develop his ideas about natural selection. He knew his ideas would meet with disapproval and opposition. He waited more than twenty years to publish them!

In fact, Darwin would probably have never published his ideas if it had not been for Alfred Russel Wallace. In 1858, Wallace published a paper about evolution. A friend of Darwin's urged him to publish his own ideas on the subject. In 1859, Darwin's book, The Origin of the Species was published. Darwin explained the process of natural selection, the method by which individuals of a species that are better adapted to their environment are more likely to thrive and reproduce than other members of the species. Darwin also named some factors that affect the process of natural selection. Among these were overproduction, competition, and variations.

Overproduction happens when species reproduce many more offspring than can possibly survive. The world has limited resources. Many species create many more offspring than there are resources like food, water, and living space to support them. This creates a struggle to survive for the offspring. Those who are better able to survive then pass on their genes to their offspring. This is the process of natural selection. Darwin studied the reproduction of elephants, one of the slowest breeding land mammals, and found that if a single female survived and reproduced at the same rate, after 750 years there could be 19,000,000 descendants of this single mother!