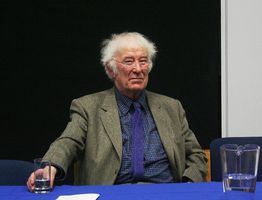 Ireland, a country full of rich literary traditions, has produced many gifted writers. Beginning in the 1960s as a young poet with potential, Seamus Heaney grew into an award-winning poet known world-wide. Heaney, winner of the Nobel Prize, has graced the world with almost fifty years of poetry.

Heaney, who grew up on his family's cattle farm, was born on April 13, 1939, near County Derry in Northern Ireland. He was the eldest of nine children born to Patrick and Margaret Heaney. His father was a cattle farmer and dealer and was well known at the cattle markets and fairs. His mother was also well known because of her family lineage, the McCann family from Castledawson. The McCann family was more connected to the modern world than the rural economy of Patrick Heaney. Heaney's father was a silent man, while his mother was more willing to speak out. Heaney believed that this contrast later led to a "quarrel with himself" that was evident in his poetry.

The Heaney family was raised in the Irish Nationalist tradition and the Catholic faith. Heaney enjoyed playing football for St. Malachy's Gaelic Football Club in Castledawson. He attended school at Anahorish Primary School. At age twelve, he won a scholarship and was able to attend St. Columb's College, a Catholic boarding school, where he surpassed others in English, Irish, and Latin. The family later moved to a larger farm a few miles away in 1953. Sadly, when Heaney was fourteen, he lost his four-year-old brother to a road accident. When he began his writing career, Heaney wrote about the loss of his brother in two poems. In 1957 Heaney traveled to Belfast where he attended Queen's University. He studied English Language and Literature. It was during this time that Heaney began writing. He even published some of his poetry in the university's magazines, Q and Gorgon.

Heaney eventually graduated from Queen's University with a First Class Honours degree in 1961. He began teacher training at St. Joseph's Teacher Training College where he trained for two years. After completing his training, Heaney began teaching at St. Thomas's Secondary Intermediate School in Ballymurphy, West Belfast. This was an important time in Heaney's life. He was exposed to many poets and their writings, such as Patrick Kavanagh, Ted Hughes, and Robert Frost. Heaney's poetry started to be published around this time period. His first poem to be published outside of the university setting was Tractors, published in 1962 in the Belfast Telegraph.

While teaching at St. Joseph's, Heaney married Marie Devlin in 1965. Marie was also a teacher as well as a writer. During that same year, Heaney published his first book of poetry, Eleven Poems. The following year he published Death of a Naturalist, his first full volume. The poems in this collection focus on the changes that took place in Heaney's life when he moved from childhood to adulthood. The poems also focus on young Heaney's thoughts on various aspects of nature. Among the many awards he received for this work was the Eric Gregory Award. Heaney later moved to another teaching position at Queen's University teaching Modern English Literature. During this phase of his life, Heaney had two sons, both of whom were later featured in his poem, A Kite for Michael and Christopher. He later had a daughter, and she as well was the topic of his poem, A Hazel Stick for Catherine Ann. In 1968 Heaney's poetry became well known when he traveled on a reading tour with writer Michael Longley.