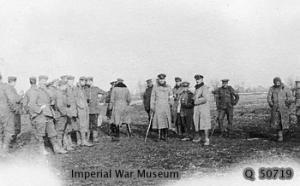 Silent Night: The Christmas Truce of World War I

Caption: British and German soldiers meet in No Man's Land during the unofficial Christmas Truce.

World War I, also called The Great War, was one of the deadliest wars in history. The Allied Forces included the United Kingdom, France, the Russian Empire, New Zealand, Belgium, Serbia, Canada, Australia, Italy, Romania, and the United States. The Central Powers included the countries of Germany and Austria-Hungary.

The fighting began in earnest in August of 1914. It started with the invasion of a German colony called Togoland in West Africa by French and British troops. For most of World War I, Allied and German forces were at a stalemate in trench warfare all along the Western Front in Europe with the exception of Christmas in 1914.