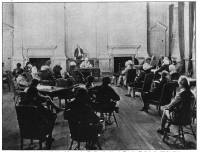 The Bill of Rights

The Bill of Rights was not a part of the original documents that formed our country. Following the Declaration of Independence, which established the United States of America as an independent country, the job turned to establishing a government for the people. The first document drafted was known as the Articles of Confederation. These articles, signed by representatives from the thirteen original colonies in 1778, established a union among the states binding them together into one country. However, it did not cover important issues such as state borders, individual rights, and central government powers - such as regulating commerce and taxes.

In order to create a strong central government, a Constitutional Convention was held in 1787 to amend the Articles of Confederation. As they discussed the changes needed, the delegates from twelve of the thirteen states - Rhode Island did not send a delegate - saw a need to write an entirely new document. The result of this work was the Constitution of the United States of America. It created an entirely new government for the new country and set up a system of "checks and balances" among three branches of government - legislative, executive, and judicial.

One of the arguments that could not be settled was about individual rights. Many of the delegates to the convention saw a need to prevent a tyrannical central government from being formed. They remembered all too well the British rule they had endured and wanted to be certain it would not happen again in the new United States. During the Constitution's time of ratification, many state legislatures also recognized the need to protect individual rights. These states expressed their fear that the central government would have too much power, and they demanded amendments to prevent this from happening.

The voice of the people was heard, and James Madison was asked to produce a list of rights. His first draft included fifteen rights, of which only twelve survived the debate in the legislature. On September 25, 1789, the first Congress voted to amend the Constitution and sent a list of twelve amendments to the states for ratification. The first two, which applied to compensation for congressmen and the number of constituents they would have, were not passed. The other ten were ratified by the states, producing the Bill of Rights.

The Bill of Rights includes the following freedoms:

The First Amendment provides for freedom of religion, press, speech, and assembly and the right to petition the government for a redress of grievances.

The Second Amendment provides the freedom to bear arms.

The Third Amendment prohibits the government from forcing citizens to house soldiers during times of war.

The Fourth Amendment gives individual rights of privacy, protects people from unreasonable search and seizure, and restricts searches from being made without probable cause and a warrant.