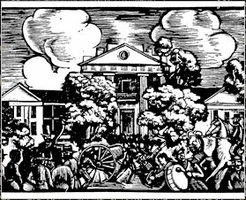 The Brooks and Baxter War

Contested elections are nothing new in the history of America but few ended in a war. In 1874, a political struggle in Arkansas festered over the 1872 election of governor of Arkansas. Within two years, a war broke out over this election. The Brooks and Baxter War took place during April and May of 1874.

Arkansas was part of the Confederacy during the Civil War. The issues that separated the North from the South had not easily been put to rest. The "reconstruction" of the South started with a series of laws passed by Congress. These laws dealt with reintegration of the eleven Confederate states. The laws included ratification of the Fourteenth Amendment. (The amendment guarantees all citizens, regardless of race or color, equal protection under the Constitution.) The Reconstruction Acts also gave voting rights to all men. The white Southerners who had held office or served in the Confederate Army lost their voting rights temporarily as "punishment" for their participation in the Confederacy.

Northern Republicans came to Arkansas to "help" in the rebuilding process after the war. These northerners who came with nothing more than a suitcase (called a "carpetbag") were called "Carpetbaggers" by many Southerners. They felt their sole intent was to further take advantage of the already defeated South. The Unionists were people living in the South who supported abolition during the Civil War. These northern sympathizers were called "scalawags." The reconstruction changes in the new Arkansas Constitution severely reduced the power of the Democratic Party. As a result, several Unionists were elected to office in Arkansas.

Head of the Arkansas Republicans, Powell Clayton was elected governor in 1868. He was not a native of the state. He had been a brigadier general in the Union Army stationed in Arkansas. Many Arkansas citizens believed that Powell Clayton was corrupt. Several of his actions bordered on the illegal, including bribery and voter fraud. The Republican Party had begun to fracture. During the 1868 presidential elections, violence broke out and a Republican congressman was assassinated. Clayton declared martial law in fourteen counties to suppress the uprisings. He also cancelled elections in several counties because of the violence. This no doubt affected the outcome of the presidential election since many of those who opposed Ulysses Grant were in these districts.

In 1869, the Republican Party in Arkansas split in two. The new liberal Republicans opposed Governor Clayton. The new Republicans called themselves the Reform Republicans. Their leader was Joseph Brooks who was a minister. Joseph Brooks ran against Elisha Baxter for governor in 1872.