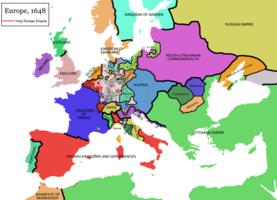 Caption: Map of Europe in 1648 (at the end of the Thirty Years War). Red line running through Austria marks the border of the Holy Roman Empire. Information from Penguin Atlas of Modern History.

The Thirty Years War was one of the many events that changed the face of Europe in the years following the Reformation. It was an on-again, off-again war, and the changes it brought were gradual rather than sudden.

In the years before the war, the Holy Roman Empire, once a powerful force in Europe, had become weaker. Its lands were ruled by the Hapsburg royal family, and other countries hoped to gain land from the Hapsburg Empire. There was also an ongoing conflict between Protestants and Catholics. Some Protestants were ready to revolt against their Catholic rulers. These conditions gradually escalated into the Thirty Years War.