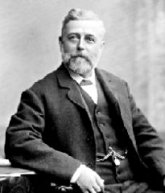 Every once in a while, you come across a person whose name is sure to give some people the giggles. At one time it probably wasn't considered to be a humorous name, but something changed. This is what happened to Thomas Crapper, the plumber and sanitation engineer.

Little is known of Thomas Crapper's early life. Some have even gone so far as to say that his life was fictional. He was, in fact, a very real person. He was born in Yorkshire, England, in September 1836. His family was working class, and his father was a steamship captain. When he was fourteen, Thomas was apprenticed to a master plumber in the Chelsea area of London, England.

As a teenager, Thomas spent many long hours learning his trade and learning to do a good job that his master approved of. Apprentices often served several years without pay learning a business. When he was considered competent at the job, he would be promoted to being a journeyman. A journeyman could work unsupervised and earn money. A journeyman might serve another three to four years under a master craftsman to become a master himself.