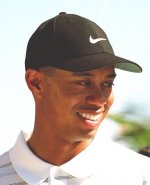 Eldrick Woods was born on December 30, 1975. Shortly after his birth, his parents gave him his nickname, Tiger, to honor his father's friend. His parents, Earl and Kutilda, contributed a number of nationalities to their newborn son. Earl's ancestry includes Chinese, African-American, Caucasian, and Native American. Kutilda is of Thai and Chinese heritage. Tiger calls his nationality "Cablinasian." The word is a mixture of Caucasian, Black, American Indian, and Asian.

Tiger Woods' golfing career started when he was just an infant. After watching his dad hit some golf balls, he began imitating his father's swing. At the age of two, he appeared on the Mike Douglas Show with Bob Hope. Tiger and Mr. Hope, an avid golfer himself, had a putting contest. Tiger played amateur golf for many years and earned a number of victories and awards. He was the U.S. Junior Amateur champion in 1991, 1992, and 1993 and U.S. Amateur champion in 1994, 1995, and 1996. He is the youngest person ever to win the U.S. Junior title and the only person who has won it more than once. He has been called the greatest golfer under age 20 of all time.

In 1996, Tiger left Stanford University and began his professional career. He won two tournaments that year and went on to win the Master's Tournament in April of 1997. His ranking rose to the top of the Official World Golf Rankings later that summer. With 264 consecutive weeks at the top of the rankings, he has also held this place longer than any other golfer has. Since beginning his career, he has gone on to break a number of records in the game. He holds the record for the lowest score to par (-19) in a major tournament. In 2000, his adjusted scoring average of 67.79 gained him the record of lowest in PGA Tour history. Golf Digest reported that Tiger's winnings in 2007 topped 122 million dollars.