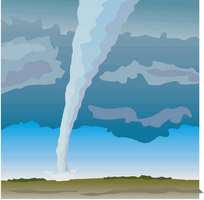 A tornado is one of the most violent storms on Earth. It is a twisting, spinning mass of air that stretches from a thundercloud to the ground. A tornado can last anywhere from a few minutes to an hour or more. It can travel across the ground for less than a mile or over one hundred miles. The most violent tornadoes cause massive damage and the loss of many lives.

A tornado often occurs when warm, moist air meets cool, dry air. Many times, it begins in a thunderstorm cloud, often in the kind called a supercell. A supercell is a giant storm cloud that contains strong updrafts of wind and tremendous amounts of energy. When conditions are just right, these updrafts begin to spin. Then, if one of these spinning air masses tilts into a vertical direction, it is on its way to becoming a tornado. In this stage, the rotating air mass is called a mesocyclone. A mesocyclone can be two to six miles wide, and it has a good chance of escalating into a tornado.

Some tornadoes appear as an ominous black twister and others appear to be bright white. At first, some tornadoes may be difficult to see, but once they begin to pick up dust and debris, they become much more visible.

Tornadoes have been spotted on all continents of the world except Antarctica. Almost no place is completely safe from tornadoes, but certain places are especially plagued by these dangerous twisters. The most common place for tornadoes to occur is in the United States on the large flat plains between the Rocky Mountains and the Appalachian Mountains. The geography of this area is just right for the colliding masses of warm and cool air to produce a tornado. In fact, so many tornadoes occur in this part of the United States that it has become known as Tornado Alley.