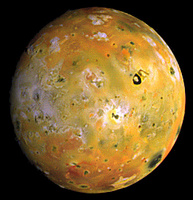 Io? What is Io? Io (eye-oh) is one of Jupiter's four largest moons. Jupiter has lots of moons, but four of them - Io, Europa, Ganymede, and Callisto - are very large, and scientists were especially interested in learning more about them.

NASA scientists just happened to have a spacecraft already in the area. The Galileo spacecraft had been launched in 1989 to learn as much as it could about Jupiter. Its main goals were to probe Jupiter's atmosphere and to study Jupiter's magnetosphere and its satellites. It was designed to be tough; it would have to be able to stand up to extreme levels of radiation.

Even before getting anywhere near Jupiter, Galileo began sending back useful information. It sent back data about Venus, Earth's moon, and asteroids. When it reached Jupiter in 1995, Galileo sent back great pictures and interesting data.

The spacecraft was doing so well that its mission was extended. Galileo had already survived two to three times the amount of radiation that it was designed to withstand. It was given a second and then a third mission.

For its third task, Galileo was sent to take a closer look at one of Jupiter's moons. The moon chosen was Io. Io was very interesting to scientists because it is highly volcanic. Its surface seems to be always changing.