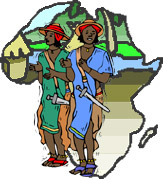 Reading Comprehension for May 25

Explorers from European countries began arriving in Africa. The British, French, Dutch, Belgians, and others began making colonies all across Africa. A colony is an area - like a town, city, or even a whole country - that's ruled by someone else. Europeans colonized much of Africa. Without being invited, Europeans took over African lands and people.

In most cases, Europeans colonized Africa in search of riches. In some cases, Europeans used African lands as a pass-through to other places. Native Africans were made to work as slaves for the Europeans. Many Africans were killed opposing European policies, and many were sold into slavery and sent to far-off countries, including America.