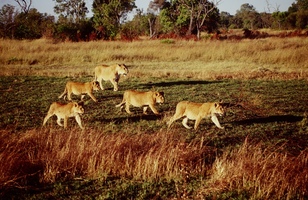 One day on the African savanna, a group of female lions was hunting. Keeping their tawny bodies low to the ground of the flat, grassy plains, the lionesses slowly crept through the tall grass. They were stalking a small herd of giraffes that was grazing on the leaves of an acacia tree. One of the giraffes wasn't eating. It stood with the others, but its head was not reaching for leaves.

The male lion, protector of the pride, came to feed on the giraffe first. Even though the lionesses did the hunting, they stepped away from the kill and allowed the male to take what he wanted first. A group of vultures flew into the acacia trees. They waited for the lions' leftovers.

After the male lion was finished, the lionesses came to eat. Cubs waited impatiently nearby. They had to wait until the adults were full before they could eat. When it seemed the females' feeding had slowed down a bit, one of the cubs rushed forward to grab some food. The other cubs watched to see what would happen to it. If the female lions let it eat, they would rush in, too. The giraffe provided enough food for all the lions of this pride - and more animals, too.