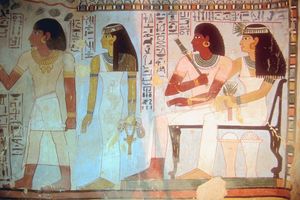 Thousands of years ago, ancient Egyptians lived along the Nile River. Once each year, the Nile flooded its banks, covering the nearby land with a layer of dark, fertile mud. The people who lived there soon found that they could grow a variety of crops in this rich soil. The rest of Egypt, away from the Nile River, was desert. Not much could grow anywhere else. Small villages sprang up along the river.

Egypt was once divided into two regions: Upper and Lower Egypt. Then around 3100 B.C., a king known as Menes or Narmer conquered Lower Egypt. He became the first king or pharaoh to control all of Egypt.

Each year after the river flooded, farmers planted their seeds. They grew barley and wheat for bread. They grew flax, which was made into linen cloth for clothing. They grew many kinds of vegetables and fruits. They kept bees to collect the honey.