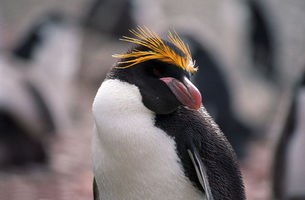 And Called It Macaroni

Yankee Doodle went to town a-riding on a pony.
Stuck a feather in his hat and called it macaroni.

The song describes a feather stuck in a hat and called macaroni. The author was not talking about pasta. He was describing fashion. "Macaroni" meant a fancy way to dress many years ago.

Little do people know that the song has something in common with penguins. The macaroni penguin was given its name for the same reason. It has long yellow feathers on top of its head. The feathers are called a plume. Who knew that a penguin was so fashionable?