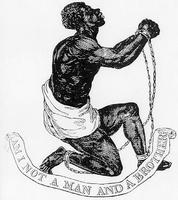 While the slave trade was making some people in England rich, there were others who were not willing to sit back and let it continue without opposition. These people, men and women, banded together in groups to bring an end to the slave trade and to abolish slavery in English colonies.

Quakers in England began the Committee for the Abolition of the Slave Trade in 1787. Abolitionists in this organization, including James Ramsay, Granville Sharp, and Thomas Clarkson, lobbied Parliament to end the slave trade. Since Quakers were not permitted to become members of Parliament, they recruited member of Parliament William Wilberforce to champion their cause.