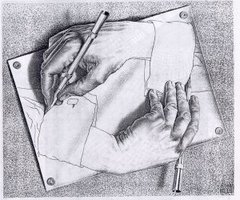 How can math be art? M.C. Escher asked that question. He answered it, too.

Maurits Cornelis Escher was born on June 17, 1898. He was born in the Netherlands. The Netherlands is a country in Europe. M.C. was the youngest in his family. His father had a good job. The family lived in a large house. It was called Princessehof. It later became a museum.

When Escher was nine years old, he learned carpentry. He learned how to play the piano. In school, his grades were not very good. His best subject was drawing. His parents sent him to a religious school. He met his best friend there. His friend liked to draw. They tried out new ideas together. His first drawing was a portrait of his father. A portrait is a picture of a person.