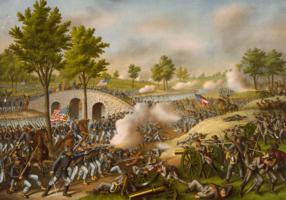 In 1862, General Robert E. Lee decided to march his troops north into Maryland. He wanted to win a victory for his army in the North. He was sure it was an important step in winning the war. He also hoped that a win in the North would force other countries to recognize the Confederacy as its own country. These countries would then be willing to send supplies that the South badly needed.

Luck was against Lee from the beginning. A Union soldier found a copy of Lee's plans at a camp. It was a perfect opportunity for General George McClellan to beat the Southern army once and for all. A strong win at this battle would cripple the Southern army. The South would have a hard time building another one.

McClellan did not use the chance he had to attack the Confederates. He waited too long to make a decision. By the time he started to march his army toward Lee, Lee knew of the lost plans and was strengthening his army.

The two armies fought smaller battles on September 14 in mountain passes. Lee tried to stop the Union army from marching farther south. He could not. He decided to make a stand near the Antietam Creek. This creek was near the town of Sharpsburg. This is what the Confederates would call the battle.

The battle started the morning of September 17. That day would turn out to be the bloodiest day of the Civil War. For the next seven hours, the Union army attacked the left and right sides of the Confederate line.