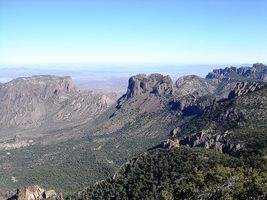 Big Bend National Park is in Texas. It is like three parks in one. There are mountains. It is in a desert. It is on a river. The park has a lot to share.

The Rio Grande forms the park's southern border. It is also the border between Mexico and the United States. The river carved out canyons. It waters nearby plants. Many plants live there. There are agaves and prickly pears. Some trees that can be found there are oaks and junipers. The big bend in the river gives the park its name.

The park protects part of the Chihuahua Desert. It protects the largest area of this desert in the United States. The desert has cacti. It also has mesquite and yuccas. Jackrabbits and road runners are some animals that live in the desert.