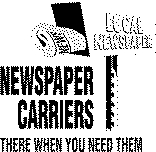 Evan has big plans for Newspaper Carrier Day. He wants to collect one thousand rubber bands. He will give them to the newspaper carriers in his town. They use them to keep the newspapers rolled up.

Evan has eight hundred fifty-five rubber bands so far. He only needs one hundred forty-five more. He does not have much time, though. Newspaper Carrier Day is on September 4. September 4 is only one week away.

Evan thought about his problem. He had an idea. He would make a poster about newspaper carriers. He would take it to the mall. He could tape it to a table. He would sit there and see if people would give him more rubber bands.

On Saturday, Evan took his poster and his table to the mall. He asked if he could set the table up there. He was told that he could.

He set up the table and the poster. He sat at the table all day. Many people stopped to look at the poster. Some of them asked questions. No one gave him any rubber bands, though.

At 5:00 Evan had to get ready to go home. He felt very sad. He had made big plans to help newspaper carriers. But he only had eight hundred fifty-five rubber bands.

Evan started folding up the table. He didn't see the man standing behind him.