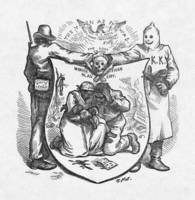 After the Civil War was over, blacks wanted the same rights that whites had. Many whites in the South did not want that to happen. They did everything in their power to continue to control the blacks who stayed in the South. One way they tried to control blacks was with Black Codes. These codes or rules were a way for whites to try to keep things the same as they were before the Civil War. These rules limited the freedoms of blacks who used to be slaves.

Black Codes were different in every state in the South. But many of the laws were very similar. They all had the same goal in mind. The laws continued to control the lives of former slaves.