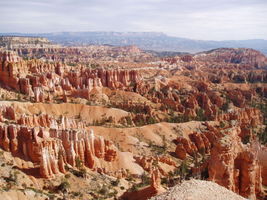 Bryce Canyon is in Utah. It is not a typical canyon. Canyons are usually carved by erosion from a river. This is not how Bryce Canyon formed. The canyons and unique rock formations are formed from water, though. Most days of the fall, winter and spring seasons the temperature dips below the freezing point. As the day goes on, the temperature rises. Water that seeps into cracks in the rocks freezes. The ice expands the cracks. This is called frost-wedging. Rainwater also rounds the corners off the rocks and changes the formations.

Bryce Canyon is famous for the hoodoos found here. What is a hoodoo? A hoodoo is a pinnacle, spire, or oddly shaped rock left behind by erosion. They are just one of the unique features here. All the landforms start as a plateau. As the plateau wears away by weathering, it develops cracks. These cracks run vertically, or up and down. This is called a fin. Sometimes, these cracks wear all the way through the rock. A hole can form in the fin. This is called a window or an arch. When the top of the window or arch wears through, a hoodoo forms.