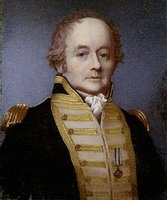 If you were a Vice Admiral in the British Royal Navy, how would you like to be remembered? Most likely, you would want people to talk about your glorious ocean battles. Stories about your strong, courageous leadership would be good. William Bligh dreamed of these honors, too. Unfortunately, historians remember Captain William Bligh because of the mutiny of his crew.

According to some stories, William signed up to be a part of the Royal Navy when he was 7 years old. That seems unlikely. Historians do agree that he was born on September 9, 1754. He was the son of a customs officer. Some accounts say that he became a servant to a naval officer when he was 9. Many boys signed up to be seamen so that they could become officers as soon as possible. Most likely, William became a seaman when he was 16 years old.

No one knows a lot about William's early life. He did study math and science. He also enjoyed sketching. He served on different ships during his teenage years. He had the chance to visit the South Seas in 1776 when he joined Captain James Cook's crew. He held the position of a sailing master when he was only 22.