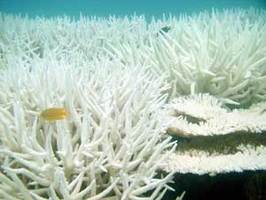 Donald's father traveled around the world for the National Oceanic and Atmospheric Administration. His current work was to study coral reefs. Donald knew they were beautiful, but he didn't know much more about them than that. As Donald's father prepared to visit the coral reefs near the Florida Keys, Donald became inquisitive.

"What exactly is coral?" Donald asked.

"It's an animal, a polyp. It creates a calcium carbonate shell around itself. Inside, it lives in harmony with zooxanthellae, algae that produce food and share it with the coral. When colonies of living coral grow for hundreds of years atop older ones, reefs form," Dad answered.

"The coral reefs always look so amazing. Their names like starburst and brain are so cool," Donald said.

"Coral reefs are spectacular! There's no denying that. However, as a scientist, I recognize that they are so much more than that. Did you know that coral reefs are the largest living structures on Earth?" Dad asked.

"Then I bet you didn't know," Dad continued, "that coral reefs are home to approximately twenty-five percent of all fish species."